The Power of Brand USA

The Power of Brand USA

Most people care where a product is made. Roughly 76% of people globally agree that “the country a product is ‘made in’ impacts (their) preference to purchase it,” according to data from the 2020 Best Countries report.

Americans share this sentiment; “Made in America” still commands purchase preference and people are voluntarily spending more on American goods. In fact, 71% of Americans agree that they are “willing to spend more for something that is made in my country.” American preference for homemade products is the primary reason that U.S. spending increased by 3.2% in the third quarter of 2019.

The Best Countries Brand Origin Index exemplifies how to harness the power of a country’s brand. It ranks the connection between a nation and the popularity as well as preference of its products. America ranks high in multiple product segments. 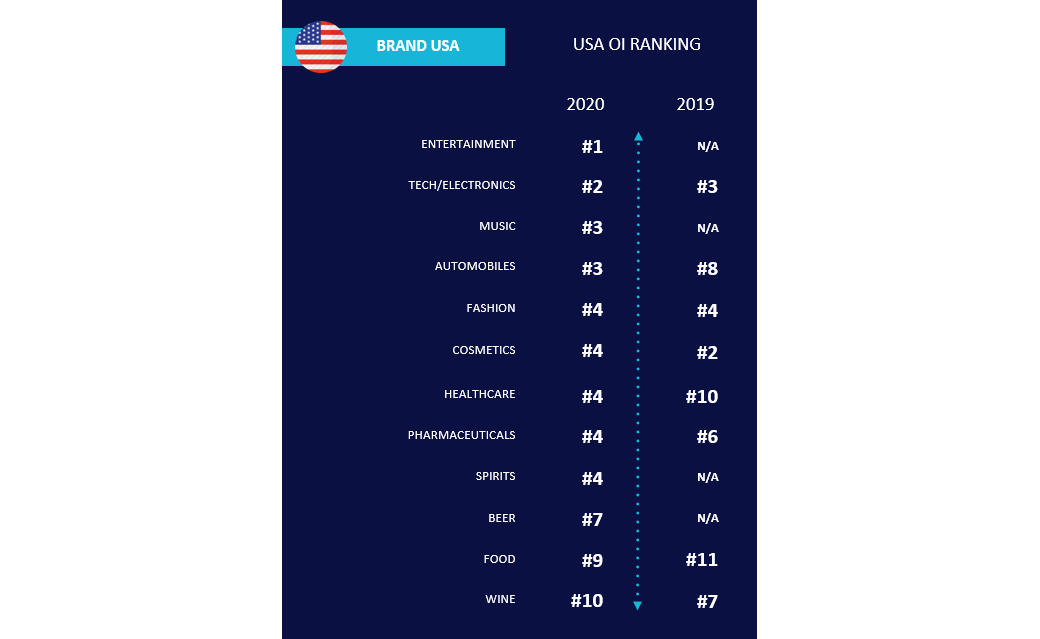 America ranks in the top 10 countries for all categories in the Brand Origin Index, leading as No. 1 in entertainment, No. 2 in technology and electronics, and No. 3 in automobiles and music.

No. 1: Entertainment
Amid consumer demand for instant gratification, the U.S. entertainment industry dominates and continues to grow from Hollywood movies to esports and online content providers. For example, in the streaming business, Netflix is the front-runner, but the war is on. Products such as Amazon Prime, Disney+, and Apple are in hot pursuit of Netflix’s consumers’ loyalty.

No. 2: Tech and Electronics
In technology and electronics, America rose one rank to No. 2 in 2020 to overtake Germany, one of the world’s leading engines of innovation. According to a recent study of consumer insights on brand equity and perceptions by BAV Group — the longest and largest running study of consumer insights on brands — Google, Facebook, Apple, and Microsoft are seen as 29% more Innovative, 27% more Up to Date, 17% more Creative, and 21% more likely to outperform comparative brands.

No. 3: Automobiles & Music
The U.S. also is making a comeback in the automobile industry, shifting from old-school American muscle to sleek, smart, and tech-equipped cars that are also environmentally friendly. Cars like the Tesla Model 3, Chevy Bolt, and Ford Mustang Mach-E are helping the U.S. to once again define automotive success. In fact, America’s largest improvement in any category on the Brand Origin Index is in Automobiles – improving from #8 in 2019 to #3 in 2020. Likewise, BAV’s data shows that people perceive American automobile manufacturers to be 42% more visionary and 21% more innovative than their non-American counterparts.

Like automobiles, the U.S. ranked in third-place on the Brand Origin Index for Music. The US music market is more than triple the size of any other country's music industry and is home to 6 out of the 10 highest grossing music venues in the world. Many of the top 2019 billboard artists are American such as Taylor Swift, Post Malone, Ariana Grande, and Travis Scott.

America’s Increasing Brand Power
When the Best Countries report first launched in 2016 with 60 countries assessed, America ranked fourth overall in brand power among the surveyed countries. America fell to seventh in 2017 and eighth in 2018 and 2019. During those three years the number of countries assessed was 80, and the addition of Switzerland in 2017 helped push the U.S. down; the European country has been No. 1 since its debut. But American brand power increased in 2020 for the first time in the history of the report. Although this year the number of countries assessed shrank to 73, the countries in the top 10 are not affected and America is inching its way back up, ranking seventh overall for 2020.

This improvement coincides with the growing economy, declining unemployment rate, and progressive actions on social topics. For example, the United States’ gross domestic product growth was 2.1% in the third quarter of 2019 and the unemployment rate was 3.5% as of November 2019, the lowest it has been in half a century. Likewise, this past year has held more open discussions on progressive topics to improve quality of life such as longer maternity leave, increased government funding for health care, boosting the minimum wage, and tuition-free state college.

We will continue to see business leaders and consumers shape the story and power of Brand USA. Brands that understand when and how to harness the power of their country’s Origin Index for brand positioning will be able to succeed.

Best Countries 2020 in partnership with US News and World Report and The Wharton School of the University of Pennsylvania.

Best Countries is a rankings, news and analysis project created to capture how countries are perceived on a global scale. The rankings evaluate 73 countries across 24 rankings drawn from a survey of more than 20,000 global citizens, measuring 75 metrics that have the potential to drive trade, travel and investment and directly affect national economies. Read the Best Countries report here.